Eat Out To Help Out success in South West Hertfordshire 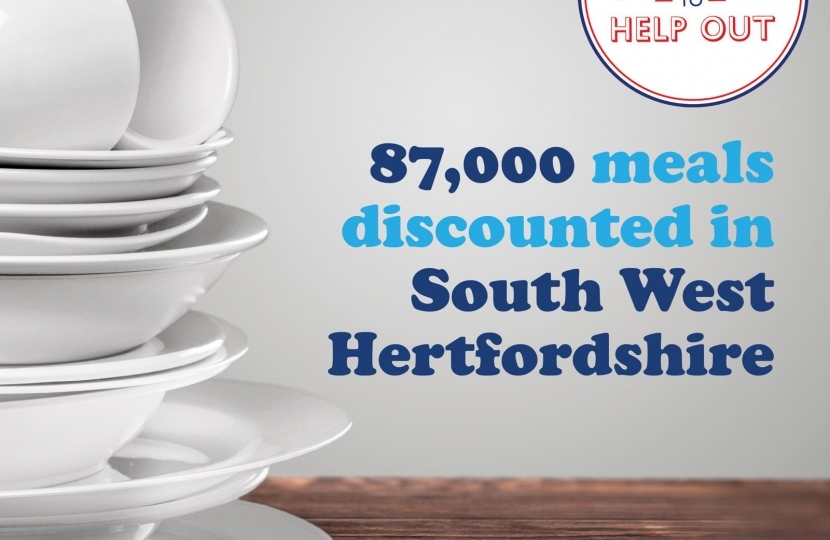 More than 87000 meals were claimed in South West Hertfordshire under the Government’s Eat Out to Help Out scheme, according to the latest statistics.

In total, more than 100 million meals were claimed across the UK under the scheme, which ran throughout the month of August. In total, 84,700 establishments signed up to the scheme, including 103 in South West Herts.

The scheme is credited with protecting 1.8 million jobs across the country, with restaurant bookings significantly up on the previous year. Data from OpenTable shows bookings increased by an average of 52 per cent on Mondays, Tuesdays and Wednesdays throughout the whole of August, compared to the same days in 2019. The final day of the scheme, Monday 31 August, saw a 216% jump in bookings against the equivalent day in 2019, again according to OpenTable.

Eat Out to Help Out was just one part of the Conservative Government’s Plan for Jobs – an ambitious £30 billion strategy to create, protect and support jobs as the country bounces back from coronavirus. The Government will continue to support the hospitality industry with a temporary discount to VAT, from 20 per cent to 5 per cent, until 12 January 2021.

Some restaurants are continuing the scheme under their own steam to try and encourage customers to feel safe eating in restaurants again and get the economy moving.

Good luck to all of the restaurants and cafes out there who are bouncing back!

I know the past year has been tough for our local high street businesses. That’s why I’m working to help address their concerns through meetings with the Chamber of Commerce.