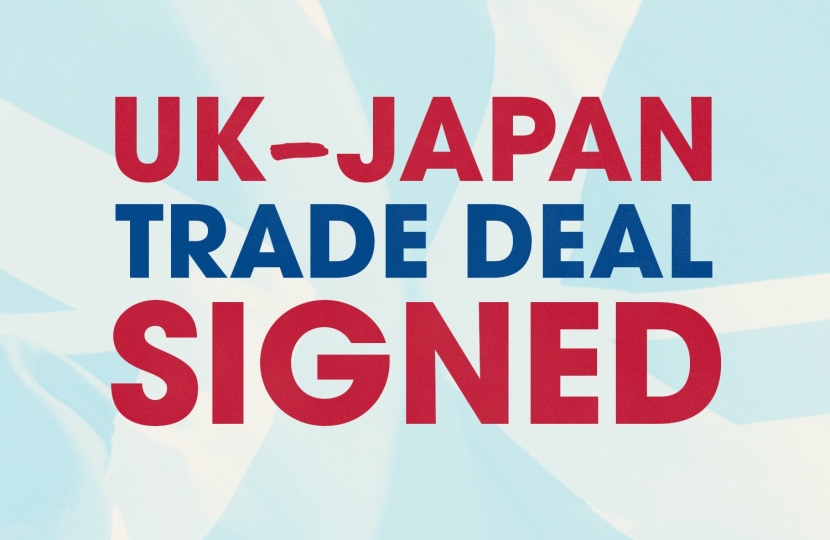 Gagan says " Brilliant news on the first UK trade deal in decades. The £15bn deal is the start of many and shows that Global Britain is open for business with the world."

The UK has secured a free trade agreement with Japan, which is the UK’s first major trade deal as an independent trading nation and will increase trade with Japan by an estimated £15.2 billion.

The deal is tailored to the UK economy and secures additional benefits beyond the EU-Japan trade deal, giving UK companies exporting to Japan a competitive advantage in a number of areas. It will help to create jobs and drive economic growth throughout the whole of the UK.

The deal is also an important step towards joining the Comprehensive and Progressive Agreement for Trans-Pacific Partnership (CPTPP). This will give UK businesses a gateway to the Asia-Pacific region and help to increase the resilience and diversity of our supply chains.

UK businesses will benefit from tariff-free trade on 99% of exports to Japan. Government analysis shows that a deal with Japan will deliver a £1.5 billion boost to the UK economy and increase UK workers’ wages by £800 million in the long run.

UK manufacturers, food and drink producers and the tech sector are all set to benefit from the measures in the UK-Japan deal, which include:

The UK and Japan have a long-shared history as free trading nations and this deal marks an historic moment that will deepen the partnership between two democratic island nations.